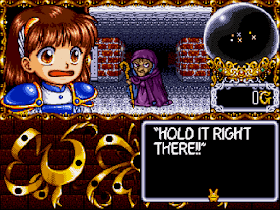 Genre: Role-playing (RPG)
Perspective: 1st-person
Pacing: Real-time, Turn-based
Published by: Compile
Developed by: Compile
Released: 1996
Platforms: SEGA Genesis / Mega Drive, TurboGrafx-CD (PC Engine)
The plot tells us about a five-year-old magical girl Arle Nadja, who studies at a magical school. To pass the final exam, she needs to go through all the floors of the tower of Satan, which is full of mysteries and dangers.
The quest part of the game consists in moving Arles through the catacombs, solving puzzles and collecting items (from the first person). The combat component is contained in standard fights with monsters (side view). The whole interest lies in the fact that no manuals are given for fighting monsters - spells must be mastered and memorized by yourself. In the course of the passage, a lot of undead will stand in the way of the heroine, as well as other students of the magic school.
‹
›
Home
View web version