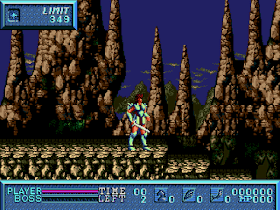 Genre: Action
Perspective: Side view
Visual: 2D scrolling
Gameplay: Platform
Setting: Fantasy
Published by: Taito America Corporation
Developed by: Cyclone System
Released: 1991
Platform: SEGA Genesis / Mega Drive
The demon lord Gorgon has returned to enslave the people. The Titans agreed to help humanity and singled out a hero named Macress. Receiving special prizes, it will be possible to turn into a centaur, an angel and a man-fish. There are three levels of character upgrade, ~3000 points each. Each level is a maze; after finding the key, you can open the exit and get to the leader of the stage. For the victory we get an artifact. A magic mirror gives +1 to transformations, an enchanted bell stops the movement of enemies, a dragon's claw destroys them, etc.
‹
›
Home
View web version