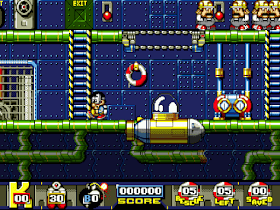 Genre: Puzzle
Perspective: Side view
Visual: 2D scrolling
Pacing: Real-time
Published by: Codemasters
Developed by: Odysseus Software
Released: 1994
Platforms: SEGA Genesis / Mega Drive, DOS
In this game, you have to help a rescuer who has to get people out of a sinking ship. The ship itself is divided into many sections and in almost each of them there will be a group of survivors and the goal of the game is precisely to bring them all out. The gameplay itself is similar in principle to the Lemmings game, which was released two years earlier and where you need to solve various tasks to save the fabulous lemming creatures. And if in the game about lemmings the function of navigation and interaction with objects is performed using the cursor, then in Sink or Swim this role is assigned to a sprite character who can press levers and blow up passages with bombs. Homo Panicus (objects of salvation) are rather dumb and straightforward in their rush to salvation and therefore they will go to the exit through fire, water and copper pipes (literally) and the player will have to block them all the way from various dangers.
‹
›
Home
View web version