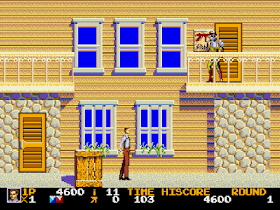 Genre: Action
Perspective: Side view
Visual: 2D scrolling
Gameplay: Platform, Shooter
Published by: Namco Hometek Inc.
Developed by: Namco Limited
Released: 1991
Platform: SEGA Genesis / Mega Drive
The game is based on a movie released back in the 60s. This is the second installment in the Rolling Thunder series of games. In the game you play as two secret agents: a girl - Leila and a guy named Albatross outwardly, he resembles one of the heroes of the game Vigilante 8: 2nd Offense. The Geldra organization, thought to have been destroyed, makes itself known by destroying several satellites in space. It's up to WCPO's Rolling Thunder again to deal with this organization. The game has a two-player mode where two heroes can play at the same time. They will visit different places of the world, including Egypt. As in most of these games, there are various weapons, bonuses, enemies, there is a battle with bosses.
‹
›
Home
View web version