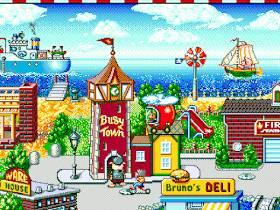 Genre: Adventure, Educational
Perspective: 1st-person
Gameplay: Puzzle elements
Educational: Math / logic
Published by: SEGA of America
Developed by: Novotrade Software Kft.
Released: 1994
Platform: SEGA Genesis / Mega Drive
An educational game for children, unfortunately there are not enough good games of this genre for the Sega Genesis. This game is designed for preschool children. So the child should not have problems with it. The game is based on the television show The Busy World of Richard Scarry, a product of CINAR and Paramount Television. The game is like an interactive book with a story written by Richard Scarry. The player will explore the world of Busytown. And of course, here we will meet familiar characters Huckle Cat and Lowly Worm. As the game progresses, the player will have to go through many different mini-games, arrange the appropriate items, become a seller, and even visit the wind swarm.
‹
›
Home
View web version