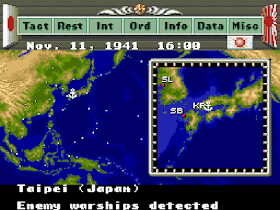 Genre: Educational, Strategy
Perspective: Managerial / business simulation
Educational: Geography, History
Vehicular: Naval / watercraft
Setting: Historical events, World War II
Published by: KOEI Corporation
Developed by: KOEI Co.
Released: 1993
Platform: SEGA Genesis / Mega Drive
P.T.O. - This is a turn-based strategy whose events unfold during the Second World War. The war for dominance in the Pacific between the flotillas of Japan and the United States. In the game, you can choose one of nine scenarios. The first scenario, this is a whole company from the beginning of the war to victory, who will follow it, depends only on you. The remaining eight scenarios use the key moments of this war, where you only need to win a few fights in order to pass it. An example is "Attack on Pearl Harbor", where you only need to repulse the attack of the Japanese troops in order to complete this scenario.

This game is one of those few strategy games where you have to defeat the enemy not with pressure and superior numbers of troops, but with well-thought-out tactics. This is due to the fact that the number of your ships is limited, and the time it takes to build one good ship is such that you simply do not have time to create a lot of them, and you will have to cherish every ship in the game.
There are about 50 bases (ports) in the game that can be captured, each base will bring you resources, and will also serve as a point for refueling and repairing ships, in addition, they have a number of other important functions. 270 types of ships from small transports to huge aircraft carriers that you can place in 16 fleets. About 10 types of fighters, torpedo bombers, bombers, etc., whose main purpose is base defense, but if you have aircraft carriers in your fleet, they just do a great job of attacking enemy bases and ships. You can develop your technological and industrial levels, perform research, which will allow you to create more weapons, improve them, and also invent new ones.
The game has a rather large, convenient menu that allows you to perform all the numerous game functions from it. The game itself is quite easy to control, both in port/sail mode and in combat. Many different political, economic and military functions make the game more difficult, each turn longer, but also make you feel like a real commander in chief, on which the fate of millions of people depends. P.T.O. quite reckless, drawn into it then quite difficult to break away.
In the game, you can set the speed and difficulty of the game as standard options: a) the speed of displaying messages on the screen is set at the beginning of the game and has a range from 1 (fast) to 10 (slow); b) the difficulty of the game is set at the start of a new game, it can have values ​​​​from 0 (easy) to 10 (difficult), it mainly affects the number of additional points that you will be given when distributing the budget. So with additional ones, for example, speed can be configured with options to show / not show battles, and difficulty with such an option as showing / not showing the location of enemy ships.

In my opinion, the graphics for such a game is not particularly important, and apparently so is considered in KOEI. The graphics are not bad in the world, port and fleet view modes, nothing outstanding, it is ordinary and not striking. But in combat mode, it is rather scarce, monotonous ships, sea and land of incomprehensible color, the same type of design of bases, leave not the best impression. But I want to emphasize once again that this is not so important for a game of this genre.

The sound design of the game, to put it mildly, let us down. If you can find good sides in the graphics, then there are only minuses in the sound. There are several melodies in the game that play under different circumstances, some of them can be put up with, but here is the main melody ... Throughout the game we hear the same repetitive melody, it’s hard to even call it a melody ... After fifteen minutes it starts to annoy, not just annoying, but very strong... The sounds in the game are also not up to par, of course, you can understand from them what action was performed, but despite this they are very, very inexpressive and meager...

This is an "Amateur" game of the players who played it, you rarely see a person who said "So-so", they usually fall into two categories: those who rated it as "Completely sucks" and others who say "Just super!" about it. The latter are much more than the rest because the game really deserves the attention of all gamers and not only those who play military-strategy games. The rather low score was due to the low quality of graphics and sound, which is inherent not only in all games released by KOEI, but also in almost all other strategy games. In my opinion, this game deserves much more appreciation.
‹
›
Home
View web version