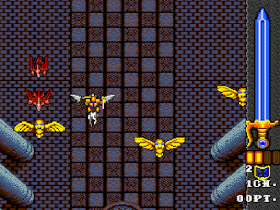 Genre: Action
Perspective: Top-down
Visual: 2D scrolling
Art: Anime / Manga
Gameplay: Shooter
Setting: Classical antiquity, Fantasy
Published by: Namco Hometek Inc.
Developed by: Namco Limited
Released: 1990
Platform: SEGA Genesis / Mega Drive
Scrolling shooter in a vertical position, originally released on arcade machines in 1988, released by Namco.
The game's plot is based on ancient Greek mythology and tells the story of the young prince Apollo, who rushes to the aid of his beloved Artemis, who was captured by the demon Typhon while walking. The evil villain imprisoned her in his temple, locking her in a dungeon, where Medusa turned her to stone.
For seven chapters, it is necessary to exterminate the demon's minions, since Apollo, riding Pegasus, is armed with a powerful sword that has the ability to emit fireballs. Also, by holding the fire button for a few minutes, you can increase the power of your sword and at the same time shoot a large fireball, causing more damage to enemies. In order not to suffer greatly from the attacks of enemies, you should pick up items that make it possible to increase speed and firepower. At the end of each chapter (level), the Boss (a character from ancient Greek mythology) is waiting, seeking to prevent Apollo from coping with its mission.
Between the chapters, you can watch cut scenes showing the events taking place in the temple. The game has two modes of passage (Novice and Advanced) and in order to complete the game one hundred percent, you should choose the most advanced of them, otherwise you will only be able to visit Apollo in four stages.
‹
›
Home
View web version