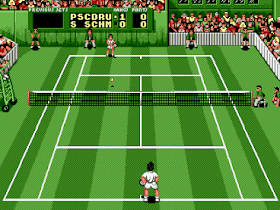 Genre: Sports
Perspective: Behind view
Sport: Tennis
Published by: Codemasters Software Company Limited
Developed by: Codemasters Software Company Limited
Released: 1994
Platform: SEGA Genesis / Mega Drive
The first tennis simulator in the series named after Pete Sampras. This game can be called a really quite real simulator. You can select multiple surfaces of the field, the surface affects the bounce of the ball and other properties. The only real character in the game is Pete Sampras himself. The rest are all fictional. There are both left-handers and right-handers among the players. Avid Tennis players know what the big difference is. The game has three main game modes: match tournament, world tournament, but if you enter the secret code (password) Zeppelin will open two additional modes: Crazy Tennis and Huge Tour.
The game has a large number of settings that will impress even the most picky player. The game has the ability to play up to 4 players.
‹
›
Home
View web version