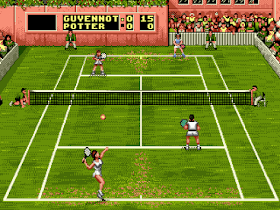 Genre: Sports
Perspective: Diagonal-down
Sport: Tennis
Published by: Codemasters
Developed by: Codemasters
Released: 1995
Platform: SEGA Genesis / Mega Drive
This is the second part of Pete Sampras Tennis tennis simulator. The game is approved by the most famous tennis player of the late 2000s, Pete Sampras. The game has undergone significant graphical changes, and the engine itself has also been redesigned. True, AI is not always good, sometimes it is even very easy to win the game. The game has many settings, several game modes. You can select a player and a playing field.
‹
›
Home
View web version