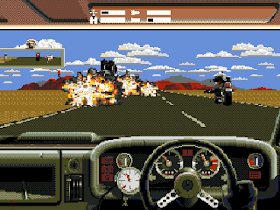 Genre: Action, Racing / Driving
Perspective: 1st-person, Behind view, Side view
Visual: 2D scrolling
Vehicular: Automobile
Setting: Post-apocalyptic
Published by: Mindscape
Developed by: Mindscape International Ltd.
Released: 1992
Platform: SEGA Genesis / Mega Drive
The future, the whole planet has become a wasteland, numerous gangs of thugs fighting for fuel (a kind of currency in this world).
The gameplay is divided into two parts: first we drive and shoot bikers with machine guns, then we run out of gas and we are already on foot trying to get it, also shooting along the way or, if the cartridges run out, breaking through with our bare hands through crowds of thugs.
As for the quality of the game, it is, shall we say, contradictory. If the car driving is done well (the car has quite interesting physics and it’s quite fun to drive at first, plus a good action game where you can shoot a biker who has come too close to you with a sawn-off shotgun in the face), then the foot part is done by three with a minus (absolutely bad action, devoid of any sane dynamics).
Graphically, the game is made in exactly the same way as the gameplay. When you drive a car, you see that the main character is driving with one hand, while the other is holding a shotgun. Plus, the game works quite stably, though when an additional window appears with a shotgun and bikers looming past the sight, the game noticeably sags. The landscapes are rather monotonous, but this is more of a claim to the setting of the game. When it comes to action out of the car, things get a lot worse: a lame-legged hero, crookedly animated opponents, plus a deranged landscape.
Of course, you might then think: why did the developers make the part on foot? But still it adds some part of the atmosphere. Usually, if other games run out of fuel, then the player is shown the inscription Game Over and that's it, start over. When I played, I thought that everything would be so, but suddenly, for once, I was allowed to get out of the car and look for this very fuel. This is, to put it mildly, unusual.
In conclusion, we can say that, despite its inconsistency, this game has a post-apocalyptic atmosphere, for which a lot can be forgiven.
‹
›
Home
View web version