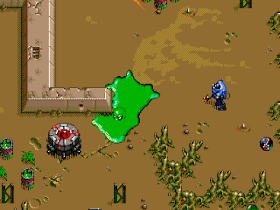 Genre: Action
Perspective: Top-down
Gameplay: Puzzle elements
Published by: SEGA of America
Developed by: Sega Technical Institute
Released: 1995
Platform: SEGA Genesis / Mega Drive
Dr. Caine is a scientist working for a large chemical corporation. One day, he stumbled upon an interesting piece of material on the corporation's computer network. It was written about a new plague virus, with which the owner of the company wanted to infect the environment and people. To then sell antidotes, which only he had. Something reminiscent of the plot of one of the series in the TV series The Lost World. As soon as he had time to familiarize himself with the materials, an angry owner burst into his office with his bodyguards. Injected Caine with the plague virus, and threw him into a vat of green liquid. But it didn't kill Caine, he became a mutant. Now his main goal is to take revenge and prevent the virus from breaking out of the enterprise. Whether Dr. Caine will take the former form of a person depends only on you. If you manage to find all the DNA scattered in the level. In the game, you control a green puddle with a head in the middle. As a weapon, you can use a blow with green goo or spit. All rounds are teeming with enemies, there are also various puzzles.
‹
›
Home
View web version