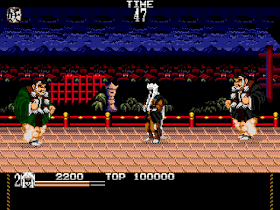 Genre: Action
Perspective: Side view
Visual: 2D scrolling
Gameplay: Beat 'em up / brawler
Setting: Japan (Ancient/Classical/Medieval)
Published by: DreamWorks
Developed by: KID Corp.
Released: 1992
Platform: SEGA Genesis / Mega Drive
The game is a Beat-'Em-Up set in the Japanese Kabuki theater setting. You find yourself in a place called the Underworld, where you have to defeat the Evil Kabuki Lord.
The gameplay is reminiscent of the Golden Ax series of games. You can collect scrolls to use magic, and its strength and appearance will differ depending on the number of scrolls used. There is also the possibility of playing for two players.
‹
›
Home
View web version