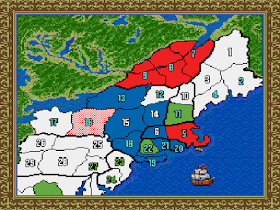 Genre: Strategy
Perspective: Top-down
Pacing: Turn-based
Setting: Historical events, North America
Narrative: War
Published by: KOEI Corporation
Developed by: KOEI Co., KOEI Corporation
Released: 1994
Platform: SEGA Genesis / Mega Drive
Turn-based strategy from the famous Koei's Historical Simulation Series. The game takes us to the events of the American Revolutionary War. You can play as the rebels led by George Washington, as well as the British army, suppressing the uprising. Unfortunately, there is no way to play as the Indians, driving the invaders from their native lands. As in other games in the series, there are military, economic and political components, and among the commanders there are real historical figures. You can play both with the computer and with each other.
‹
›
Home
View web version