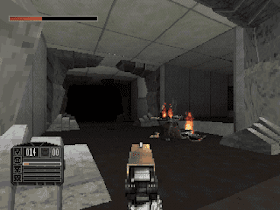 Genre: Action, FPS
Perspective: 1st-person
Gameplay: Shooter
Setting: Sci-fi / futuristic
Published by: SPS
Developed by: Motivetime Ltd.
Released: 1997
Platform: PlayStation (PSX, PS1)
The game is set in a post-apocalyptic future. Earth is on the brink of collapse after years of alien invasion and occupation. You are among those who remained to fight the invaders, as well as with their own government (the so-called Council Of Five), which is in cahoots with aliens, trading earthlings to conduct inhuman experiments on them. Choosing one of the four resistance fighters: the cybernetics genius George McKenzie, the fire mage Akiko Tyler, the alien soldier (he joined the resistance) or the cool mercenary Bloodchaser Field, you go into the tunnels hidden deep in the mountains, it is there that the main invasion forces and their stronghold are located. paragraph. A distinctive feature of the game is that each character has his own version of the game (the difference is small, but still nice), his own set of weapons and, among other things, his own superpowers. Also, each of the fighters has its own set of replicas. Hybrid is quite a complex and confusing game, hard to compete with the great Doom, and despite the potential laid down by the developers, they failed to develop the game properly. (volgame)
Interesting: The game has a complicated history, the development of Hybrid began a long time ago, the name of the game changed several times, initially, according to the developers, it was supposed to be a port from the 3DO platform of the Vertuoso game, then it was planned to call the game Psalm 69, but in the end we saw a new game called hybrid.
‹
›
Home
View web version