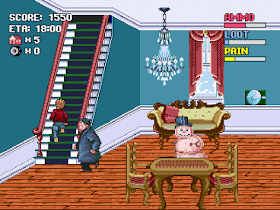 Genre: Action
Perspective: Side view, Top-down
Visual: 2D scrolling
Gameplay: Platform, Puzzle elements
Published by: SEGA of America
Developed by: Brian A. Rice
Released: 1992
Platform: SEGA Genesis / Mega Drive
Our old buddy Kevin is in trouble again with long-time hoarders of other people's property, who again have a desire to profit from something. Kevin is faced with the task of protecting his house, and with it a couple of neighbor's houses, from a wealth-hungry duo of robbers. In this, Kevin has to rely only on his ingenuity and mind. So let's help him stop the robbers, hindering them in every possible way: either setting traps in houses everywhere, or creating weapons to confront and detain criminals for as long as possible - until the arrival of the ever-slow police.

Graphically, the game has 2 modes: side view while inside the building and top view while outside. When entering an unrobbed house without robbers, it becomes possible to set traps, which, by the way, are several types and a limited number. Kevin moves around the city on a sled, but not on some simple ones, but on a sled that can compete with the robbers' car in speed. For you will have to compete in speed with them more than once in order to prepare everything in advance for their arrival. Both in houses and on the street, you can collect material to create weapons in the future, or ammunition for them, or tires (useful things). The main fire, which is the most action-packed part, starts from the moment the villains get into the house. This is where your battle begins, where your main task is to wear down your opponents so that they change their minds and cross out this house in their money plans (although they are stubborn guys: it didn’t work out in one, they will go to another; well, what, before the arrival of the time police a lot).
‹
›
Home
View web version