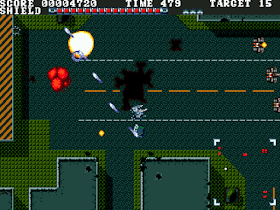 Genre: Action
Perspective: Top-down
Visual: 2D scrolling
Art: Anime / Manga
Gameplay: Shooter
Vehicular: Tank
Setting: Sci-fi / futuristic
Published by: Renovation Products
Developed by: Wolf Team
Released: 1990
Platform: SEGA Genesis / Mega Drive
The player has the opportunity to control a supertank, equipped to the teeth with combat ammunition, shoot enemies, smash the terrain, hustle with bosses that are ten times larger than our "baby" in size. At each of the presented levels-locations, the player has a goal: to get to the boss, making his way from the piles of iron of defeated opponents along the way.
To achieve this goal, the player will have to think quickly, because the enemy is not waiting and is actively gaining strength and firepower with the help of conveyor stations that continuously release enemy equipment. The activation of the boss room lock (that is, its opening) directly depends on the number of enemy production stations destroyed (a sufficient number of henchmen have been defeated, then the bump will be interested in you: either he will find you anywhere in the level, or he will wait for your arrival; and until then the boss will "sleep").
In addition to the usual "carnage with projectiles" (button A), the tank can launch a plasma salvo that burns everything in its path and causes great damage to the environment (button C). Also, if you search well, along the way you will come across various bonuses that enhance the standard Rapidfire. One of these bonuses is a mobile firing module. It always looms in front of the tank’s nose, no matter how you spin, and once you hit it with a plasma gun, this little one will start spinning at a wild speed, feeding cartridges in a chaotic manner and destroying everyone and everything. The rate of fire at this moment is maximum. This thing has its own charge of energy and at the end of it can detonate.
All this show is seasoned with excellent musical accompaniment from Motoi Sakuraba, perfectly suited to the atmosphere of the game.
‹
›
Home
View web version