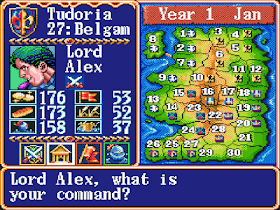 Genre: Strategy
Perspective: Diagonal-down
Pacing: Turn-based
Setting: Fantasy
Published by: KOEI Corporation
Developed by: KOEI Co.
Released: 1992
Platform: SEGA Genesis / Mega Drive
One day, an evil magician imprisoned the spirit of a dragon and six wizards in gems. The king of Ishmeria ordered these gems to be inserted into the crown and named it Gemfire. With her help, the ruler did great things for the benefit of his people. But the day came when the crown, handed over to the evil King, began to serve the darkness. You must restore peace to Ishmeria! At the beginning of the game, you choose one of four scenarios, the side you will play as, and your advisor. During the game you will not only fight with the enemy, but also develop various branches of the economy. Analyzing the data on the screen under the portrait of the leader, it is necessary to pursue a balanced policy for the development of industries, not forgetting to develop and protect the occupied territories.
‹
›
Home
View web version