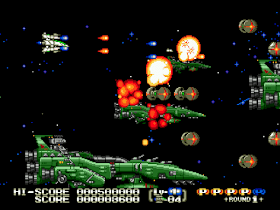 Genre: Action
Perspective: Side view
Gameplay: Shooter
Vehicular: Space flight
Setting: Sci-fi / futuristic
Published by: Soft Vision International Co.
Developed by: Aprinet
Released: 1993
Platform: SEGA Genesis / Mega Drive
You are a lone fighter pilot in the middle of one of the biggest space battles of all time. Once and for all remember the rules of a space shooter - maneuver often, fly fast, collect power-ups at the first opportunity, and shoot at what is not you!
It's one of the more imposing R-type clones, and is reminiscent of the Macross (also a shooter) game on the SNES. Fantastically detailed multi-plane moving backgrounds, mind-blowing music, well-designed weapons and restrictions system, and solid gameplay put this game straight into the top 5 ingenious shooting games of all time.
The real only drawback is the complete lack of a plot, but fans of shooting games are unlikely to be upset by such a trifle, right?
‹
›
Home
View web version