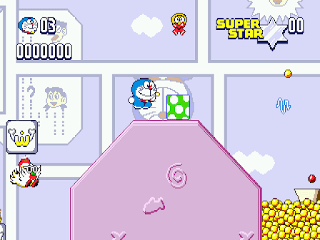 Genre: Action
Perspective: Side view
Visual: 2D scrolling
Art: Anime / Manga
Gameplay: Platform
Published by: SEGA Enterprises Ltd.
Developed by: G-Sat
Released: 1993
Platform: SEGA Genesis / Mega Drive
A colorful platformer about the adventures of the robot cat Doraemon in order to save his friends.
Of the features of the game, I would like to note the battles with the bosses, presented here as harmless mini-games: for example, to defeat one you need to win a game of Rock-Paper-Scissors, over the other, competing in speed, jump onto a climbing pole exactly at the moment of stopping music.
The game is not difficult and on the contrary encourages with all sorts of bonuses: for example, acceleration, the ability to fly, an understudy hero who repeats the player’s actions and lives, so passing it with 99 attempts in reserve is a simple matter.
‹
›
Home
View web version