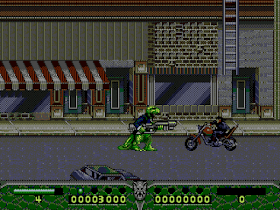 Genre: Action
Perspective: Side view
Gameplay: Platform, Shooter
Setting: Sci-fi / futuristic
Published by: SEGA of America
Developed by: SEGA Interactive Development Division
Released: 1993
Platform: SEGA Genesis / Mega Drive
Mid-range action platformer based on satirical comedians from Tom Mason. A huge army of formidable enemies is attacking the earth, and one of the three "dinosaurs for hire", armed with a machine gun, will have to stop them.
In fact, there is no plot as such in the game, the player just needs to go through a series of stages, and at the end of several boss fights, which are the best part of the game. It is allowed to upgrade weapons with the help of upgrades selected at the levels, close to enemies you can also attack melee. You can play alone or with a partner.
‹
›
Home
View web version