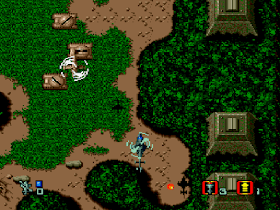 Genre: Action
Perspective: Top-down
Visual: 2D scrolling
Gameplay: Shooter
Vehicular: Helicopter
Narrative: War
Published by: Kyugo of America
Developed by: A.I Co.
Released: 1991
Platform: SEGA Genesis / Mega Drive
Graphics in this kind of games has never been their advantage. There are many such games on Genesis, but this game is still good - many levels, weapons, different enemies, and it's not boring to play it. Before the mission, we choose weapons for our helicopter. Levels are completed in three stages - top view, helicopter flight over the enemy base and playing as a paratrooper on the same base.
‹
›
Home
View web version