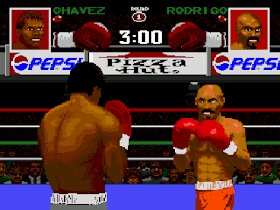 Genre: Sports
Perspective: Behind view
Sport: Boxing
Published by: American Softworks Corporation
Developed by: Sculptured Software
Released: 1993
Platform: SEGA Genesis / Mega Drive
The game is an official remake (finishing / using the same engine) of the game Boxing Legends of the Ring. At first glance, the changes seem insignificant, athletes (boxers) have been replaced, only Julio Cesar Chavez, by the way, the game is named after him. There really are no changes in the gameplay, all the blows remain the same. But now there is a lot of blood in the game. The faces of opponents are now covered in blood, when hit, blood splashes in all directions. In Boxing Legends of the Ring, there was no blood on the faces, the faces changed only in the icons.
‹
›
Home
View web version