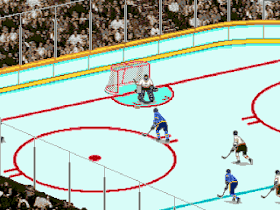 Genre: Sports
Perspective: Diagonal-down
Visual: Isometric
Sport: Hockey
Published by: Accolade
Developed by: Radical Entertainment Inc.
Released: 1994
Platform: SEGA Genesis / Mega Drive
This is hockey, or rather a traditional ice hockey simulation. Unfortunately the game was not licensed by the NHL. Because of this, there are restrictions on the name of the commands. In general, the game is not bad, it fulfills its main goal. The game has several modes Exhibition, Half Season, Full Season, Play-offs, All-Star, including training. The game of the team also depends on the performance of the players.
‹
›
Home
View web version