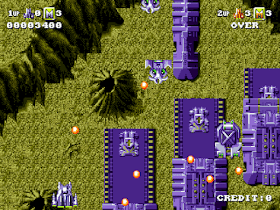 Genre: Action
Perspective: Top-down
Gameplay: Arcade, Shooter
Setting: Sci-fi / futuristic
Published by: Electronic Arts
Developed by: Cope-com
Released: 1990
Platform: SEGA Genesis / Mega Drive
The game is a vertically scrolling shooter. As an Earth fighter pilot, you must free Commanders Lori Bergin and Barry Mayers, captured by the Barrax Empire. It is also necessary to interfere with the plans of the Barrax empire. You can say a rather primitive plot, but what else can you think of, and whether it matters at all. As in most similar games, the fighter's weapons can be upgraded by collecting bonuses. The game has a lot of settings that will help the beginner and professional to set the appropriate game mode. The game supports a two-player cooperative mode, which is much more interesting to play the game.
‹
›
Home
View web version