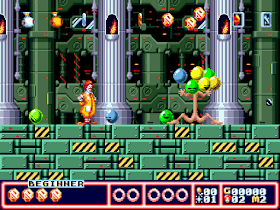 Genre: Action
Perspective: Side view
Visual: 2D scrolling
Gameplay: Falling block puzzle, Platform
Published by: SEGA of America
Developed by: Treasure Co.
Released: 1993
Platform: SEGA Genesis / Mega Drive
Quite a diverse platformer made to advertise the network of the most popular fast food restaurants McDonald's. In the game you'll play for the red-haired clown Ronald McDonald. You have to go through a large number of levels. Destroy crowds of monsters and fight the leaders (bosses). One day Ronald McDonald was walking in the woods. And under one of the big trees, he found a piece of a treasure map. It turns out that three more pieces of the map are in the anthropomorphic tomato (tomato) and other monster-like creatures. Ronald McDonald will take the circus train to Magical Town. There he will fight a goblin. Which will give Ronald McDonald another piece of the card. He will also visit the island and the pirate ship, where he will fight with the captain of the pirates. Then he will go into space, where he will fight the aliens and find a treasure chest.
‹
›
Home
View web version