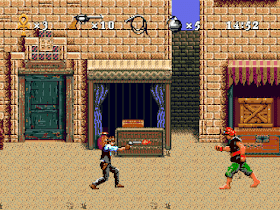 Genre: Action
Perspective: Side view
Visual: 2D scrolling
Gameplay: Puzzle elements
Published by: SEGA of America
Developed by: Brian A. Rice, Waterman Design
Released: 1994
Platform: SEGA Genesis / Mega Drive
Game about the adventures of Indiana Jones made on the basis of a series of popular movies. At the end of World War I, Indiana Jones was given a secret mission to track down and capture the Kaiser agent. Of the weapons, Indiana Jones has his trusty whip and revolver, as well as several grenades. The gameplay itself, in my opinion, is a bit unfinished. It seems that the game is not debugged.
‹
›
Home
View web version