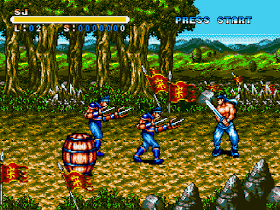 Genre: Action
Perspective: Side view
Visual: 2D scrolling
Pacing: Real-time
Gameplay: Beat 'em up / brawler
Interface: Direct control
Setting: China (Ancient / Imperial), Fantasy
Published by: King Tec Information Co.
Developed by: Never Ending Soft Team
Released: 1999
Platform: SEGA Genesis / Mega Drive
Great game on the theme of medieval China. It is highlighted by the historical context and beautiful animation of magic. You can choose a guy with a sword, a tall girl with a saber, or a big guy with an axe. The girl is fast and has the longest weapon, the big guy is the most powerful and slow, the guy with the sword is the most balanced. To complete the whole game, you need to put Tough Guy or Hero mode in the menu (the default is easy mode). In the same menu, you can set yourself more lives. Running and running shots are available. A worthy competitor to the Golden Ax series. Also known as Beneath the Clouds. His original name is Shui Hu Feng Yun Zhuan.
‹
›
Home
View web version