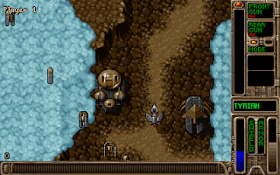 Genre: Action
Perspective: Top-down
Gameplay: Arcade, Shooter
Setting: Sci-fi / futuristic
Published by: XSIV Games
Developed by: Eclipse Software
Released: 1999
Platform: DOS
The good old top-down side-scroller Tyrian has been overgrown with additional missions, new types of ships and even more destructive weapons and is ready to please both hardened veteran fans and newcomers who are not familiar with the original with its crazy gameplay. There are no major changes in this re-release, and the storyline will be nothing new for those who have already fought enemy fleets in the previous version of the game. All the same Trent Hawkins, who, by the will of fate, has to save the galaxy from more and more terrible threats over and over again, the same insane gameplay, branded black humor, a mind-boggling number of opponents and spending money earned in the store between tasks.
What is really worth paying attention to is the new features that gave the game a few more hours of exciting gameplay. Of course, the Hazudra Fodder episode, which was absent from the original, catches the eye first. Here you finally have to find out who was behind the dark plans of the insidious mega-corporation Microsol, once again go through fire and sword through asteroid fields, secret space bases and already familiar planets, and also try your hand against the rebellious god of Zinglonite fanatics! Naturally, no one is going to help Trent in this difficult task, but, rest assured, the sets of weapons and ships, exclusively presented in Tyrian 2000, are more than enough to easily turn an army of any size into dust. Needless to say, all of this new technology can be used in the campaigns of the original game as well, turning familiar and already worn-out gameplay into a great way to pass the time?
There are also fun mini-games that seem to take you to a completely different gaming universe, and a dozen additional game modes that provide Tyrian with a place on our computer even after we have already completed it a good dozen times. In addition, hardcore players will surely enjoy the new Time Attack Challenge, which requires maximum concentration and a high degree of commitment to complete successfully.
Playing the new Tyrian, perhaps, you can regret only one thing - an additional episode clearly should have been done more. Available five missions, albeit with the possibility of choosing alternative paths, end too quickly, no matter how you try to stretch the fun. But otherwise, the version from 1999 is in no way inferior to its famous "ancestor" and is a worthy game for any connoisseur of arcades, and just for people who love high-quality and exciting games.
‹
›
Home
View web version