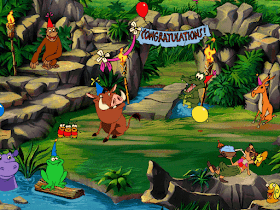 Genre: Action
Perspective: Behind view, Side view
Visual: Fixed / flip-screen
Gameplay: Arcade, Pinball, Shooter
Published by: Disney Interactive
Developed by: 7th Level, Disney Interactive
Released: 1995
Platform: Windows 3.1
The cutest game with the heroes of the famous Disney cartoon "The Lion King" - the meerkat Timon and the warthog Pumba, so popular that a separate animated series was shot about them.
As such, there is no plot in the game, and it is extremely difficult to determine its genre, because in fact it is a collection consisting of five mini-games: "shooting gallery", where you need to "shoot" at different animals (of course, you do not kill them, but here the crocodile, unlike the others, is crying, and he is insanely sorry), pinball in the entourage of the "jungle" (no comment), an analogue of Tetris with bugs (where Timon and Pumbaa compete with each other), "crossing the river" (you need to jump from one coast to another through moving hippos and static rocks, some of which have hyenas in the way) and, finally, a game where you have to "shoot" harmful insects ... with Pumbaa's burp.
However, it is not the set of these games that is valuable in the first place, but the level at which it is all performed. The graphics in the game are animated and, I must say, it just looks great even now. But this is 1995! Further - the game is amazingly friendly: of course, because it was made for children! After a beautiful introductory video, you find yourself in the place of choosing mini-games; so, Timon and Pumbaa will talk about what is happening for several minutes, and then they will offer you to choose a game. You choose - they will run up to the corresponding position (yes, this is all framed too!). Then, before each game - again their introductory and rather long briefing, and then - a detailed description of all the keys that will be useful to you in this game. Finally - sounds and music. Everything that is possible is voiced, but wonderful, varied and cheerful music will accompany you constantly during any game. There are few games I know that were made with the same quality and love, would be so wonderful in every way.
The game is recommended not only for children, but for everyone who loves good, beautiful and fun games for the soul, where you don’t need to strain your brain too much, but you need a certain reaction and speed of your fingers.
‹
›
Home
View web version