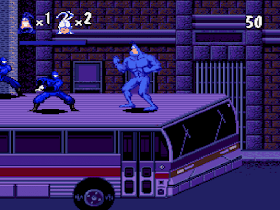 Genre: Action
Perspective: Side view
Visual: Isometric
Gameplay: Arcade, Beat 'em up / brawler, Fighting, Platform
Published by: Fox Interactive
Developed by: Software Creations Ltd.
Released: 1994
Platform: SEGA Genesis / Mega Drive
Our superhero in a fancy costume is called Tick. He is fighting with might and main with criminals on the streets of the city. The game is the record holder for the length in its genre. It consists of as many as 16 chapters with several levels in each. There are street fights in the spirit of "Streets of Rage", and levels where you have to dodge projectiles, and even one level in which you need to break different parts of the mechanism in a short time, and the boss will prevent us. In the first chapters, ninjas of different shades are waiting for us, closer to the middle - respectable men in suits and masks, closer to the end - clowns, and who will be at the very end - you will find out for yourself. The bosses in the game are easy. In the mountain levels, where you can throw enemies into the abyss, an unpleasant mistake was noticed - sometimes we are simply not allowed further. To get around it, go to the place where the adversaries were dropped from and activate a special attack (A, B and C at the same time).
‹
›
Home
View web version