The Simpsons: Bart vs. the Space Mutants (SEGA) 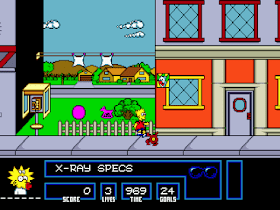 Genre: Action
Perspective: Side view
Visual: 2D scrolling
Gameplay: Platform, Puzzle elements
Interface: Direct control
Setting: Fantasy
Published by: Flying Edge
Developed by: Imagineering Inc.
Released: 1992
Platform: SEGA Genesis / Mega Drive
This game is the first in the Simpsons series of games. In the game we have to play as a bully from the cartoon Bart Simrson. He was walking at night and noticed a UFO, it landed near the city of Springfield. Bart overheard the insidious plan of the aliens, they decided to capture all the inhabitants of the earth, and first to train in the city of Springfield. Bart will have to destroy all purple objects, in any way, paint over, break, cover with linen, etc. A significant arsenal to be bought in the store. For money that can be knocked out, including from monsters. Basically, you have to unravel various riddles and puzzles, how to get to one or another object.
‹
›
Home
View web version