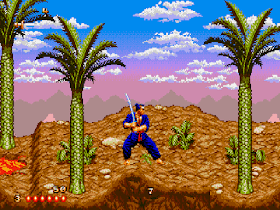 Genre: Action
Perspective: Side view
Visual: 2D scrolling
Setting: Fantasy, Japan (Ancient/Classical/Medieval), Prehistoric, Sci-fi / futuristic
Published by: Psygnosis Limited
Developed by: Vivid Image
Released: 1994
Platform: SEGA Genesis / Mega Drive
The game is a logical continuation of the game First Samurai. You also travel to different places in the world and in different time spaces. Your goal is almost the same as in First Samurai. You need to defeat the evil demon. This game has a two-player mode, which is good news. The game has a variety of weapons, both throwing and melee. But for some unknown reason, all enemies explode as if they were some kind of robots. In general, the game is not bad.
‹
›
Home
View web version