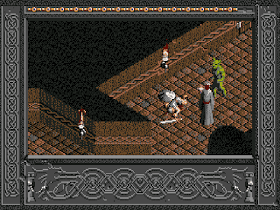 Genre: Action
Perspective: Diagonal-down
Visual: Isometric
Gameplay: Puzzle elements
Setting: Fantasy
Published by: Electronic Arts
Developed by: Sandcastle
Released: 1991
Platform: SEGA Genesis / Mega Drive
There once lived a magician who volunteered to destroy an evil and terrible fire-breathing dragon. This dragon got out of the cave and mercilessly destroyed the nearby populations. Many knights volunteered to fight the dragon. They managed only to lock the dragon in the dungeon, but they could not destroy it. But the dragon, imprisoned in the dungeon, still haunted humanity, and then you appear to finally deal with the monster. You descend into the dungeon, and the entrance closes behind you. You are at a dead end, and you have no choice but to go in search of the enemy.
You have to go through eight levels, overcoming obstacles and destroying goblins and trolls. You must also pick up all the items found in this game. Each item is used only once, except for the amulet.
‹
›
Home
View web version