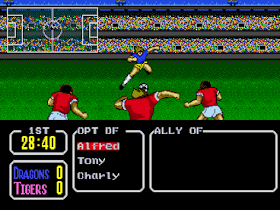 Genre: Sports
Perspective: 3rd-person
Gameplay: RPG elements
Interface: Menu structures
Sport: Football (European) / Soccer
Published by: Tecmo
Developed by: Tecmo
Released: 1992
Platform: SEGA Genesis / Mega Drive
I do not know if this game can be attributed to football simulators. If so, then Tecmo presents football in a completely different way than we are used to seeing it. It's more of an RPG than a simulation. We need to give different commands to the players: take the ball away, kick, tackle, etc. When fighting for the ball, there is a real fight, like in most RPGs. Yes, I forgot to say in the game there is also a plot, which is generally wild for football simulators. The main character of the game, Robert, loves football very much and dreams of winning the World Cup. In fact, this is the main goal in the game. To fulfill his dream, he joins the Dreams FC team with his brother David. Soon Robert becomes the captain and star of his team. From here comes career growth, up to the final game of the World Cup.
‹
›
Home
View web version