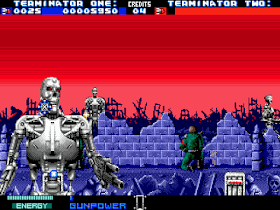 Genre: Action
Perspective: 1st-person
Gameplay: Arcade, Rail shooter
Setting: Post-apocalyptic, Sci-fi / futuristic
Published by: Arena Entertainment
Developed by: Midway Manufacturing Company
Released: 1993
Platforms: SEGA Genesis / Mega Drive, Arcade Machine
The game is based on the movie Terminator 2: Judgment Day. The game almost completely follows the plot of the film, the game reveals some aspects of the story that are poorly covered in the film. The main plot goal is to save the leader of the Human Resistance, John Connor, and his mother, Sarah, from the "liquid" T-1000 terminator.
The player takes control of a reprogrammed terminator that fights for the resistance forces against Skynet in the year 2029. The Terminator and John Connor infiltrate Skynet's headquarters and destroy it. From there, John sends a terminator back in time to protect him from the T-1000. The rest of the game almost follows the plot of the movie. At the end of the game, depending on the damage you inflicted on Skynet, doomsday may or may not come.
The game uses a first-person view. You must destroy the terminators and their auxiliary equipment. Somewhere you have to protect some kind of object from attack. You need to try not to kill your own otherwise in some cases the game may be over. Weapons will be replenished during the game from various bonuses. A game for one or two players with the ability to connect a Light Gun for SEGA Genesis called Menacer.
‹
›
Home
View web version