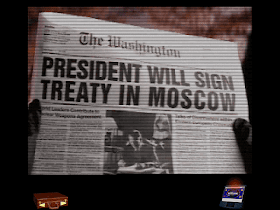 Genre: Adventure
Perspective: 1st-person
Gameplay: Graphic adventure, Puzzle elements
Narrative: Detective / mystery, Spy / espionage
Published by: Activision
Developed by: Activision
Released: 1996
Platform: DOS
Spycraft: The Great Game is one of the most unusual and ambitious quest projects of the mid-90s. Throwing aside the parodic-fantasy tinsel, shaking off sudden, out of nowhere puzzles from the shoulders of the jacket, erasing the layer of frustration from the soles of patent leather shoes, the stately figure of S. appears in the doorway and moves towards him with a confident gait. How to behave with such?
No, I will say it again: there is not even a hint of irony here - everything is very serious. S. stands out for its topicality, proximity to reality. With a caveat, the creation of Activision can be called a simulator from quests. It reflects many events of the mid-90s: the presidential elections in Russia, the nuclear disarmament treaty, leaks of secret technologies - all this looks more like a collection of newspaper articles than an adventure game. It's hard to believe, but I still haven't seen any other quests on this topic.
On live television, an ultra-right candidate for Russian presidency receives a bullet in the forehead on the podium near the historical museum with a full crowd of people. On impact, the bullet separates ¼ from his skull. Everyone is in shock. But the CIA is especially shocked, because two weeks earlier they received information about the impending assassination attempt, but considered the informant unreliable. But now the agency is on its toes as the next target, according to the same source, is the US leader, who is due to visit Moscow soon. In a hurry, a team of labor leaders from various departments is assembled, and we take on the role of one of the operatives.
Our hero works for the CIA, he does not have to use a mop to fish out old newspapers from a pond, he has special equipment and programs. His main tool is a PDA with access to the internal network, the Internet, mail, and even with a color screen - a device available only to special services.
Much of the puzzle solving takes place right on the virtual desktop. You install the necessary program on your computer and observe the public service without leaving the screen. Well, how do you like, for example, JFK Assassination Tools, in which you can recreate a three-dimensional model of the assassination scene, compare it with the pictures and, having built the trajectory of the bullet, find the position of the alleged sniper? Even in the most sophisticated igroizations of forensic series, this did not come to that. Or, here, an analysis of a telephone conversation, in which, by highlighting extraneous sounds in the recording, you can figure out where it was made from. What about photomontage? What about creating a sketch?
In some CSI you will be forced to use the same device for analyzing evidence twenty times per game, in The Great Game the situation is different - some devices can only be used once. It surprises not only with its seriousness, but also with how much more accessible it is than most quests - in the whole game there are only a couple of situations where you can get stuck.
Since the foreign intelligence officer spends most of his time at his desk, turning over virtual volumes of databases and tracking flights, there are no long dialogues in the game. The main communication takes place through the exchange of video and text e-mail. The use of FMV with live actors seems to be expected, but it's safe to say that this is one of the few games of the time where it works properly. Everything is done in a measure of spectacular and dynamic.
S. was also innovative in another way - it was probably one of the first games to have some kind of network element built into it: you could go to the official page on the Internet directly from the game. When connected to the Internet, the news feed was updated, real events were added there, but adjusted to the realities of the game, in-game copies of websites were updated, it was possible to chat with other players in a chat or on the forum, and updates were reported. Activision planned to maintain and update the site for six months and even invite real retired spies to participate in his life. Now you can read about it only thanks to the work of the chroniclers, and, alas, some links have remained inactive, that is, inaccessible.
S. is a gritty techno-thriller closer to cinema than to computer games that still impresses today. Unusual puzzles, a non-standard approach to storytelling, a certain freedom of choice distinguish it from the background of traditional adventure games, not far from the classic formula of the early 90s. Despite its seriousness, S. does not pose cumbersome, insurmountable tasks for the players and is a breath of fresh air in a stagnant genre.