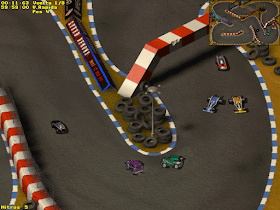 Genre: Action, Racing / Driving
Perspective: Diagonal-down
Gameplay: Arcade
Vehicular: Automobile, Track racing
Published by: Dinamic Multimedia, S.A.
Developed by: Efecto Caos S.L., East Point Software Ltd.
Released: 1997
Platform: DOS
In common with the Speed Demons of 1999, this project has only one name and genre affiliation. And, perhaps, the fact that both games appeared at the zenith of the nineties of the last century, which led to the general propaganda of the brave, but very destructive concept of "aggression", which was culturalized both in the rising art of cinema, and among the yellow-mouthed developers of computer games. So the “Demons of Speed” race is more of an artistic name than a talking one. But a closer look reveals more similarities than differences. It seems that the Speed ​​Demons of 1997 is a kind of isometric forerunner of the future 3D-descendant, which absorbed from the "parent", among other qualities, a very iridescent atmosphere of careless rides on rusty, knee-mounted chariots through the hills and valleys of the Post-Apocalypse era. The name of each of the eight presented tracks speaks for itself: Burning Rock, The Desert, Half Wheel Hill, Safari Park…
It is noteworthy that the graphic SVGA components are very well connected to each other: here a canister explodes enchantingly, someone dragged it out onto the roadway, and there it pours from the sky like a bucket, leaving a string of running circles behind the F1 car rushing through the puddles. Veterans of Micro Machines and Death Rally will find much here familiar. For example, a track filled with painful surprises and long-awaited prizes for the most dexterous players: you still need to get used to the local “laws” of the behavior of vehicles on the road, because right off the bat these devils can develop downright crazy speed. The viewing angle hovers somewhere in the 3-D Ultra Radio Control Racers area, reminiscent of the lowered camera angle in Divine Divinity. Due to the fashion for compactness, any track is almost always visible in its entirety, at a glance, significantly facilitating the passage of ornate routes and giving the player the opportunity to immerse themselves in steep turns and catching bonuses.
Among the prizes are fat packs of four-figure green Franklins, which are quickly spent on acquiring additional points and “pumping” wheels, suspension, engine and accelerators. The harmonious improvement of the "car" is fifty percent of the victory in the races; the remaining fifty percent lie like a tight steering wheel in the hands of the player responsible for, if not masterful, but at least adequate driving. Building a career on the oppression of pedestrian traffic (if there was one), when it is not about Carmageddon, Grand Theft Auto, Midtown Madness or Crazy Taxi, is a dubious prospect. The slightest deviation from the set course threatens with an irreparable loss of precious seconds in the chaotic alignment of a car that has lost control. By the way, the choice of vehicle is limited to only one copy. But what!
The competition mode conditionally divides the game into a series of jet races of seven racers with the sympathetic accompaniment of a local media helicopter, due to the buzz of which the action is drowned out by the roar of the stands, the action is accompanied by the speech of an invisible commentator. Whether the tired sun shines, whether liquid mud sours under the wheels of the car, at least the grass does not grow beyond its observation post, and criticism beyond the reach of objections pushes and colors the gameplay with shades of a high-quality sports show. After leaving five championships, one could conclude that the game ran out of steam, however, the prudent developers from Dinamic Multimedia squeezed in a simple "constructor" where the player can assemble the league to his liking, varying the tracks and setting the number of laps, direction of movement, time of day, and even weather for next weekend. Or even two, or even three, because the replay value of Speed ​​Demons, to put it bluntly, is almost inexhaustible.
‹
›
Home
View web version