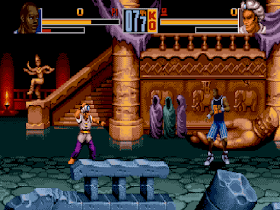 Genre: Action
Perspective: Side view
Gameplay: Fighting
Setting: Sci-fi / futuristic
Published by: Electronic Arts
Developed by: Delphine Software International
Released: 1994
Platform: SEGA Genesis / Mega Drive
The main character of this game is the most popular basketball player in the world at the time of the release of the game - Shaquille O'Neal. No, he will not throw three-point balls into the basket - this is not basketball, but a fighting game. Yes, it’s a fighting game, and Shaquille O’Neal will fight here not even with other basketball players, but with various magicians, monsters, wizards and other opponents. And now there is an opportunity to pit the highest paid basketball player in the NBA at the time with all the evil pack that reign in the game. But they will face a bitter defeat as you take charge of the NBA megastar Shaquille O'Neal.

The plot in Shaq Fu is completely insane. You have to think, a black basketball player (Shaquille O'Neal) walks into a shop with all sorts of kung fu stuff. And then the old man sitting in the shop makes a speech that you are, they say, a great warrior, you must save the kid (and at the same time the whole world) named Nezu from the dark forces. While our basketball player is trying to comprehend this news, the old man adds that there is no time for explanations and shoves the African American into the portal. The plot here, in general, serves as an excuse for what is happening on the screen. In the end, of course, we will save the world (where without it) and go to the basketball game.

The gameplay here is divided into two parts: running around the global map (looking for someone to beat) and the actual battles themselves. This is where the real gameplay begins! First of all, the game is striking in its speed. Enemies rush like crazy, every three seconds they throw something at you, every four seconds they hit you with a special blow. However, our brave hero is also not a bastard and has many tricks in his arsenal. And how it jumps! Speaking of jumping. You are guaranteed to jump a lot. Why? As the saying goes: “Because Lenkin Nose!” That is, otherwise it simply will not work. Opponents are just some kind of bastards - they don’t want to fight honestly, they conjure every now and then (however, it’s understandable - bad guys, what can you take from them)!
Although the opponents are really pleasing: everyone has their own fighting style, and everyone will have to find their own approach. For example, you met with a sorceress, therefore, she will conjure almost all the time, avoiding close combat. Or met a cat woman who has phenomenal speed. She will continuously jump, teleport and, of course, WEAR! On Easy, it was still possible to cope with her, but already on the normal it will be oh, how difficult it will be to defeat her. About the expert, I generally keep quiet. By the way, this is a minus! The last boss is easier to defeat than this cat! Balance problem! Another downside is that "Shaq Fu" is, well, very, very short. You can walk through it in just half an hour - an hour! However, there are two more game modes: tournament and duel, in which you can choose any player and chop with a friend. So there will be something to do on long winter evenings.

Graphics in the game at the level. As always on Sega, a juicy and rich picture. Also, the animation is absolutely amazing. All these jumps, spells and special attacks are incredibly smooth and beautiful. The characters are also not bad, and most importantly - originally drawn. The backgrounds here are quite beautiful, besides animated. In general, the graphics are good.

The music is quite good (but not great). The local squeaking fits into the game quite organically, keeping your morale up. And you don't need more.

And what is the result?

A good fighting game, which is not a pity to spend the notorious few hours. Spend... and then forget. Forget... and then remember again, and go through again.
You won't be able to forget the game forever! Quick fights in this game are really very dynamic, and you won't be bored. When and in what game will you still have the opportunity to play for Shaquille O'Neal, and not just play basketball, which the NBA series has to offer, but fight, and fight not with someone there, but with mysterious fighters?!

Up - jump;
Down - sit down;
A - movements typical for a basketball player;
B - fast attack;
C is a powerful attack.

In DUEL mode, you can choose any place you like. To do this, press right + B.

While playing Story Mode, go to the top right corner of Gargoyle's Peak. Place the ladder on the edge of the obstacle and have Shaq climb down to the black door. Press START and Shaq's face will turn into a blue monster face.

In STORY mode, in addition to fighting the main villains Sett and the Beast, you can enjoy victories over their counterparts. On the first island at the very bottom there is a small cave with a ladder. The Beast's doppelgänger is waiting for you there. You will find Sett's double on the second island, below, in the ruins.