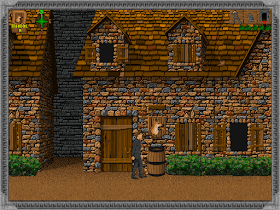 Genre: Action
Perspective: Side view
Gameplay: Arcade, Platform
Published by: Masque Publishing
Developed by: Ant Software
Released: 1994
Platform: DOS
Cairn, a walled city built around the mountain of the same name three hundred years ago, is famous for the fact that it has never been taken by enemies. It serves as a reliable defense for the lands stretching behind it, is ruled by the duke beloved by the people and is inhabited by decent people who value, above all, peace and tranquility. Due to the fact that the city was originally conceived as an impregnable bastion, its streets are circles, wide at the base of the mountain and tapering to its top, on which the personal mansion of the ruler is located in all its splendor. However, the population could not avoid the natural stratification into social groups, and in the end it turned out that the poorest people took their place at the bottom, while the aristocracy and the rich settled down at the top. Over time, the guilds that appeared in Cairn further strengthened the difference between the groups of inhabitants: some were able to get into the royal guard and take a place near the duke, drowning in luxury and wealth, and someone had to go to the streets in order to earn change in the ranks of the Guild of Beggars for daily bread. The main character, a young guy named Quinn, did not have a noble origin, so he had little choice - to ask for alms at the very bottom, or try his luck and join the Thieves Guild. Preferring the second option, the boy began to intensively study the dark craft and soon achieved significant success, which aroused fierce envy, and even hatred, in the eyes of his brothers in the profession. One day, he accidentally overheard a conversation between the master of his guild and a wealthy nobleman, who were plotting against the duke and who decided to blame Quinn for the upcoming murder. The master thief notices the guy, after which the hero is quickly stunned with a club blow to the head. The young man wakes up in a dark tower, uses the picklocks taken from the table of the master thief to throw off the shackles and open the door, and goes out into the darkness of the street full of dangers...
You need to help the falsely accused Quinn to justify himself and punish the master thief for such a vile act. Although at the very beginning you have nothing with you, you should not despair - very soon you will be able to get a dagger and develop a revenge plan. Despite the "thieves" theme, the game is much more like Prince of Persia than Thief. Controlling a character with a side view, you will have to quietly run through the streets, fight guards, climb high walls, duck from spears thrown by enemies, jump over pits in the local sewerage and much more. The compass, located in the left corner of the screen, always shows the address of the place where you need to go at the moment. The arrow nearby will not let you get lost in the dark streets. There are two control modes available in Shadows of Cairn - Exploration State and Combat State. In the first one, our hero can run fast, hide in the shadows, climb walls, jump, in the second one, he can defend himself from attacking enemies. An interesting feature of the game is that you can move across the screens not only to the left and right, but also to go "up" or "down" to, for example, cross the street or turn a corner. Thanks to this ability, it is quite easy to avoid difficult fights and deceive the guards. In the city we will meet not only enemies, but also friends who are ready to suggest what to do next. Artifacts and medicinal herbs will help you along the way, allowing you to restore health. Often you will have to wander through the labyrinths, but they do not produce a depressing impression - a variety of enemies will not let you get bored. Of the pluses of the game, I would also like to note detailed information about the history of Cairn and its inhabitants, which can be gleaned from the attached guide - developers do not always take care of the plot background of their creations with such care.
The game will definitely appeal to all lovers of quality arcade games. In it, you will have to not only and not so much kill thoughtlessly as defeat opponents due to cunning, speed and skill. I strongly recommend trying it to all gamers who love interesting and exciting adventures.
‹
›
Home
View web version