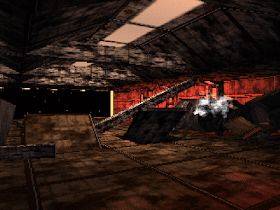 Genre: Adventure, Strategy
Perspective: 1st-person, 3rd-person
Setting: Cyberpunk / dark sci-fi, Sci-fi / futuristic
Narrative: Detective / mystery
Published by: Psygnosis Limited
Developed by: Psygnosis Limited
Released: 1997
Platforms: PlayStation (PSX, PS1), DOS
This game is intended for fans of sci-fi adventures - real adventures, with many mysteries and surprises. Her actions begin on a space shuttle approaching the station, which is inexorably drawn to the Sun. Why do people fly to this station, risking burning? They want to fix things in some way, save the station. But things are going badly. When trying to get closer to the station, the shuttle crashes, and almost all of its crew die, at least that's the impression the player gets. But the player controls the actions of the doctor - the only surviving member of the crew (why your hero survived - you will find out as the game progresses). A doctor was sent to the station to help people suffering from increased solar radiation ...
Graphics in the game Sentient is made in 3D technique. There are many characters involved in the action, each (or each) has its own characteristics. Even the expression on their faces depends on how they feel or what you say to them...
There is no intense pace of action that is typical for action games (however, quite often people die and significant destruction occurs). The interface system is very original. Talking with another person or with a computer, the main character Garret Cherova has the opportunity to choose what exactly he should talk about. Sometimes, for example, he needs to ask about some thing that he needs to find. Then the player can choose the option “what about?” and fill it with this subject.
There are several levels allocated on the space station - spaces for Garret's adventures. They correspond to separate thematic areas - engineering, science, medicine, etc. Garret is also constantly hampered by guards, whose head Jurrel Ramin is suspected of conspiracy. One of Garret's tasks is to unravel this conspiracy. Another task is to stop the development of a certain cosmic fungus that is engulfing the entire ship on one of the levels. The end of the game depends on the options of the doctor's actions against this fungus. And in total, the game Sentient has 10 different endings; in the shortest version, the game lasts only 20 minutes, and in the longest… Who knows how long it will take you to exhaust all the possibilities?
The game also has bizarre and different modes, such as Big Heads Mode or Nonsense Mode, (this is when all the characters are talking some kind of nonsense). As the game continues, Garret keeps losing consciousness and coming back to it. During these incomprehensible periods, the player is faced with the task of going through a certain labyrinth; if he manages to do this, then a movie clip will play, in which the player will receive one or two clues.
When talking with a particular character, you can also choose different manners of conversation - angry, sarcastic, funny, normal, etc. For example, some characters are quite timid, so using a bossy tone can get more information out of them; and with others you need to talk confidentially, otherwise you won’t get any sense ...
‹
›
Home
View web version