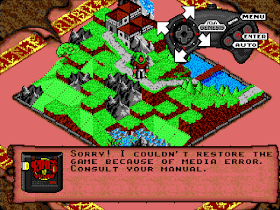 Genre: Role-playing (RPG)
Visual: Isometric
Setting: Fantasy
Published by: Electronic Arts
Developed by: Naughty Dog
Released: 1991
Platform: SEGA Genesis / Mega Drive
A wonderful isometric RPG from the creators of the popular game Crash Bandicoot - Naughty Dog and published by Electronic Arts. The name of the game is consonant with "The Lord of the Rings" for some reason, many people associate the name with this work or films. Although the plots are somewhat similar. The guys from Naughty Dog managed to do almost unbelievable, they created just a huge world. And a story that deserves a book of its own. In it, your hero can do almost anything. He can starve to death, trade, go where he can climb, and even fight whoever he wants, such as merchants. Take up to 5 characters. Will study in one of the schools of magic: Reason, Separation, Strength, Necromancy, Alteration and Challenge. And all for the sake of the cherished goal, to find 11 rings. Lots of side quests and non-linear storyline. But even here, the developers did not get everything as they would like. The game in some places slightly, how to say softer - tupit. But this does not prevent a drop from plunging into the wonderful game world. Our hero is somewhat reminiscent of the Hobbit from J. R. R. Tolkien's The Lord of the Rings.
The forgotten Ushka Bau lived in darkness until the Nexus appeared, bringing with him the Golden Age. He used the Rod of Creation to revive the world. Void saw all this, his soul was filled with envy. This demon stole the Rod of the Universe, he sowed fear and terror, and called this era - the era of chaos. Which lasted 66 years. But the holy Nexus still managed to find the demon Void, and the battle began. In a fierce struggle, the rod split. Each of the gods took a piece for himself. Later turning the parts of the wand into eleven rings. And hiding them so that none of them could find them. The Rings of Power were entrusted to each of the six clans Sorcerer, Knight, Archer, Necromancer, Enchanter and Conjurer. But soon the story turned into a legend. You will play as a student of the Magic Academy - Buck (just like Harry Potter). You have to go on a Sacred Campaign to find all the rings and return the Rod of the Universe to the Nexus.
‹
›
Home
View web version