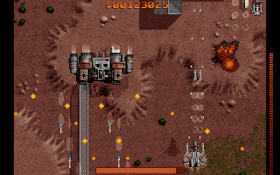 The game consists of three sectors (episodes) - Bravo Sector, Tango Sector and Outer Regions. Each of them includes nine missions ("waves"), so there are 27 levels in the game. The player can start the game from any episode, but playing them in order simplifies the game, as the episodes increase in difficulty. After passing the sector, the player can start its re-passage with the preservation of all the collected money and weapons and with increasing difficulty.
The action of the first sector takes place in an area reminiscent of the Middle East. The background consists of prairies with sparse forests and rivers, as well as structures associated with the extraction and processing of oil. In the last level of the sector, the player must destroy the oil rig of Lithos Petroleum, one of MegaCorps' competitors.
The second sector includes levels, the action of which takes place in different places. They include a large chemical factory, agriculture, a jungle, a city, and an air base. In the last level of the sector, the player destroys an ancient palace and fights a giant plane that splits into three parts.
The levels of the last sector are located on different planets and include the surface of the Moon, the Mars-like red planet, ice and volcanic worlds. In the last level of the sector and the game, the action takes place on a space station.

Opponents at the levels are presented in the form of air and ground vehicles. There are also destructible buildings. There is a boss fight at the end of each level and in the middle of the later levels. When destroying targets, the player receives money. After each level, a shop is available where the player can spend money to purchase weapons and other upgrades for their fighter.

There are two types of weapons in the game - primary and secondary. The player starts with the simplest primary weapon and can subsequently purchase more powerful ones with the money earned during the leveling process. The player can switch between different types of secondary weapons at any time. In total, the game has three types of main and eleven types of additional weapons.
The player can also use the Mega Bomb, which destroys all normal enemies and all projectiles on the screen. Bombs can be found in levels or purchased from the shop. A player can have up to five bombs at a time.
The player's fighter has 100 HP of armor to withstand a lot of hits. There are no attempts in the game - if the armor is completely lost, the game ends, but can be continued from the last save. Armor regenerates slowly provided the player is not firing and the difficulty level is less than max. Additional shields are also available, adding 100 HP each. They differ from armor in the absence of recovery. The player can purchase five of these shields.
‹
›
Home
View web version