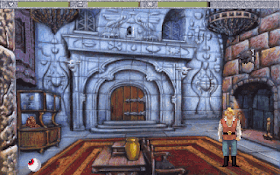 Genre: Action, Adventure, Role-playing (RPG)
Perspective: 3rd-person, Side view
Gameplay: Puzzle elements
Setting: Fantasy
Published by: Sierra On-Line
Developed by: Sierra On-Line
Released: 1993
Platform: DOS
Apogee of the series. The best series - because, unlike the fifth, this is still a quest, but unlike the previous ones, this is almost an RPG.
Having beaten Hell Avis for the second time at the end of the third series, our hero was thrown by his magic into the unknown... Welcome to the glorious country of Mordavia. Boyars rule here, vampires and werewolves live here... And gypsies. But no one likes gypsies. And Baba Yaga returns. Nobody likes her either, and she will again try to eat the Hero for dinner.
The first thing that catches your eye is a sharp change in the style of the game. Instead of joking jokes interspersed with remote fights, there are very "fun" and sometimes cruel horror films, a very gloomy surroundings, a significantly "blackened" sense of humor, the most stylish rock music as a soundtrack ... And a new combat system, more like a Street Fighter clone.
Firstly, in this series, each character has his own personal plot. Well, not ABSOLUTELY my own, but the plots of different classes now intersect much less often. The warrior will have to work for a long time, getting himself a magical weapon that can beat evil spirits; To the thief - to deal with the cult of the Dark One and save the local Thieves Guild from devastation; Magician - find a thousand and one new spells (well, not all 1001, but there are very many of them); and Paladin - to save a lot of souls, starting from the jester, from whom Baba Yaga stole a sense of humor, and ending with a little girl who was turned into a vampire ...
Separately, it is worth highlighting dreams. Now, WHERE, WHEN and after WHAT our hero falls asleep will depend on what he dreams about - through dreams, for example, the Paladin receives instructions for action; and it's just that plot moves are tied to them... Try to spend a couple of nights in the region of Erana's Garden and Erana's Staff... And then try not to sleep at all for a couple of days. And also - taste the glorious bloody wine in the cellar of the Black Temple ... The result (and a hangover) immediately weans you from alcoholism.
The game has only two drawbacks - a sharply jumping difficulty (pumping up so that you can score a Necrotaur is not as difficult as it seems... room, the hero loses hit points...)
In addition, some quests must not only be GET at a certain time of the day in a certain place, which must also be guessed (advice - the evening of the third day, outside the gates to the city, a date with Katerina) but also be completed in the shortest possible time ... And terrible bugs that sometimes they don't respond to patches at all. For example, some story events happen two times a third, the game often crashes regardless of the computer on which it is installed, and so on ... But if you ignore them and save more often, then you will see an amazing, very lively, unlike from past episodes, world...
‹
›
Home
View web version