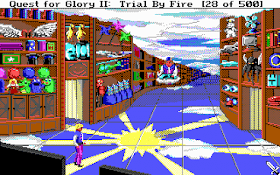 Genre: Adventure, Role-playing (RPG)
Perspective: Side view
Visual: 2D scrolling
Pacing: Real-time
Gameplay: Graphic adventure, Puzzle elements
Interface: Point and select
Setting: Fantasy
Published by: Sierra On-Line
Developed by: Sierra On-Line
Released: 1990
Platform: DOS
Continuation of the previous series. Having dealt with all the atrocities there, if you remember, we, with two friends-Kattas who kept a tavern, flew to one eastern country (where instead of God is Allah) to save the world again.
Nothing new at all - a slightly different combat system, the ability to import a hero who went through the last series, the ability to change class (becoming a Paladin ... it's fun to play for him (by the fourth series, he will start to be given cool spells), but quests are difficult for Paladins), in addition , which will scare away many, this game was not re-released in the VGA version.
For those who are not afraid, I promise a lot of fun moments alone with this game...
‹
›
Home
View web version