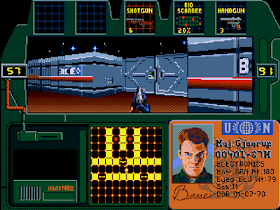 Genre: Action, FPS
Perspective: 1st-person
Gameplay: Shooter
Setting: Sci-Fi / Futuristic
Published by: Accolade
Developed by: Technopop
Released: 1994
Platform: SEGA Genesis / Mega Drive
The game is one of the very few (only 5 games) representatives of the genre for the SEGA Mega Drive / Genesis. To display the game situation using a small window, and the rest of the screen is reserved for the game statistics. The height of the floor and the ceiling unchanged. (Except with stairs - elevation angle of 45 degrees - these are used as an analogue of elevators to move between floors). However, the walls can be at an angle of 45 degrees relative to each other is not limited to perpendicular intersections. In game implemented animated textures and effects splashing blood flowing on the walls.

The game consists of 40 levels, divided into three parts, which takes place in three different locations - in the premises of the space station Europe-1, in the building of the command center Planet Defense Corps and in the basement of the building. The player must destroy all the enemies in each level, and use the stairs or the elevator to go to the next floor (level). After stripping and passing level password is issued, allowing the game to begin with the achieved level after the game console. Go to the next levels possible without destroying the enemies, but in this case the game will not give out passwords to new levels before passing the whole of the game. Every part of the game ends with a boss battle.
The player can choose one of five characters, members of Planet Defense Corps. Each character has a specialty, impacting on the gameplay as well as a different set of items in the beginning of the game. All of the characters are named after the developers of the game. Selecting the character occurs at the beginning of the game, then the player can not choose another character to death selected. Thus, the game is considered lost after the death of all the characters, which gives the player five attempts.
The game has several different kinds of weapons, which have their advantages and disadvantages. Weapons can be obtained at the beginning of the game, as well as taken from destroyed enemies, similar to other games of the genre. Weapons or objects are selected from the general list of items during gameplay. In the absence of weapons a player can attack opponents punches and legs. At the same time there are two types of punch - hook and uppercut. In addition to the weapons in the game there are different objects, such as bioskaner, allowing to see enemies on the minimap and a night vision device, which allows a better view on dark levels. Electronic equipment in the game has a limited amount of energy. Some levels of the game there are obstacles such as walls of fire that can be overcome with the help of a fire extinguisher or fire-resistant suit.