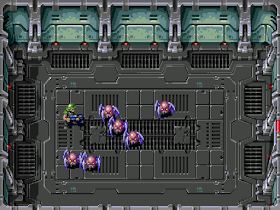 Genre: Action
Perspective: Diagonal-down, Top-down
Visual: 2D scrolling, Fixed / flip-screen
Gameplay: Arcade, Shooter
Interface: Direct control
Setting: Fantasy, Sci-fi / futuristic
Narrative: Horror
Published by: Bitmap Bureau Ltd.
Developed by: Bitmap Bureau Ltd.
Released: 2019
Platform: SEGA Genesis / Mega Drive
Xeno Crisis is an atmospheric and hardcore shooter where one or two players control battle-hardened marines on a deadly mission to defeat the aliens and return home safe and sound! Run and fight your way through thousands of opponents, explore the ruined research post, look for survivors, and finally find out why this research post has fallen into disrepair.
The gameplay is divided into seven separate areas, each of which is randomly generated in each game - this means that if you want to successfully complete your mission, then you will have to change your strategy on the go. Collect tokens from defeated enemies to upgrade your equipment between areas and look for special weapons that will give you a short-term advantage.
Try to eliminate as many enemies on the way as possible to reduce their strength, thereby expelling them into your territory. The graphics in the game are quite stylish, made in pixels and will make you a part of this scary, dangerous world.
‹
›
Home
View web version