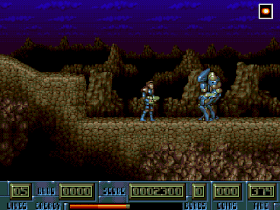 Genre: Action
Perspective: Side view
Visual: 2D scrolling
Gameplay: Platform, Shooter
Interface: Direct control
Published by: Columbus Circle
Developed by: Digital Illusions CE AB
Released: 2019
Platform: SEGA Genesis / Mega Drive
It's not every day you see a game that is decided to be published after 25 years of suspended animation. In 1994, the Hardcore project developed by Digital Illusions for Amiga, Sega Genesis and Sega CD was closed by Psygnosis due to the transition to a new generation of systems. We can safely say that all the work of the developers went down the drain because of the beloved PS1. Although the game was almost ready, this did not faze the publisher. A quarter of a century later, Strictly Limited Games took this 2D action game from the mezzanine, blew the dust off it and decided to release it on PC, renaming it Ultracore. The release for the current generation consoles was also not long in coming.
In the last decade of the last century, the industry had completely different standards. We all understand this very well. Retro games of that time are a wonderful childhood island for many gamers. The projects of modern indie studios stylized as classics do not evoke that quivering feeling that the games played at a young age gave rise to. With Ultracore, exactly the same situation happened. I would like to compare the brainchild of the Digital Illusions team with a soullessly animated creature, unable to evoke any emotions other than pity…
The plot delights of Ultracore are limited to the story of the battle of a certain warrior with a huge army of machines. The forces are not equal, but the hero is fearless and well armed. Over five levels, he aims for the very heart of the enemy base to destroy the clanging horde's control center. The stages in the game resemble labyrinths filled with secrets and caches. It is not necessary to search for them. The key objectives are to collect keycards, open doors, jump across platforms, and turn enemies into potential scrap yard customers.
The first level meets us with a sliding bridge and drones flying out from below. Do you want to cross it? There are two whole ways: guess the moment when the bridge will start moving, and use the force of inertia to make a jump or jump over the aircraft to the other side. Everything would be fine, but both methods of overcoming the abyss are implemented so crookedly that the parabola seems to be a perfectly flat line against their background. If you stand on the bridge incorrectly, it will kill you, and drones sometimes refuse to take off at the most inopportune moment.
The hero has five lives and three restarts. There are no saves! You can get the password from the level by passing it. At the same time, the length of the coveted code is such that while you enter it, at least one generation of consoles will change. The feeling that it is easier to run the stage again. Another example of designer mockery is a level with sliding walls that turn the protagonist into a cake. So what? Well, walls and walls. Jump on ledges and you will be happy! Alas, the developers stubbornly sat and calculated the pixels, so that the players had to calculate their jumps with a micrometer. One mistake - goodbye to a lifetime ...
Another circle of hell not mentioned in The Divine Comedy is the swinging platforms! Without a ruler and mathematical formulas for calculating the highest point of the oscillation amplitude, they simply cannot be overcome. Such accuracy with which they are exhibited, any surgeon would envy. To jump from one platform to another, you must first shake this conditional piece of the floor, and then, after waiting for the right moment, get off the ground and start praying, crossing yourself with your left heel. Perhaps it will fly! You can continue to exaggerate further, but believe me, Ultracore sometimes very suddenly makes the player hate it.
‹
›
Home
View web version