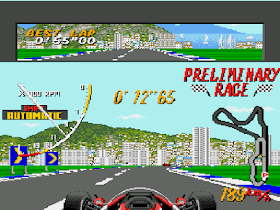 Genre: Racing / Driving, Simulation
Perspective: 1st-person, Behind view
Vehicular: Automobile, Track racing, Vehicle simulator
Published by: SEGA of America
Developed by: SEGA Enterprises Ltd.
Released: 1990
Platform: SEGA Genesis / Mega Drive
It's more of an arcade racing than a formula 1 simulator. There are three game modes Super Monaco GP, World ChampionShip and Free Practice.
Super Monaco GP mode is an arcade game with one Grand Prix (Monaco Grand Prix). In this mode, the last rider is eliminated.
World Championship - This mode simulates the 1989 Formula 1 World Championship. The goal of the championship is to win and then defend the Formula 1 world title. The player starts from the bottom, well, almost from the bottom. He starts on the weak Minarae team. After victories, he moves up the career ladder, squeezes out other riders and changes teams. The main prize for the player will be the best Madonna car, which is unlocked after winning the season. After a complete victory in the new season, the player receives a challenge from the new racer G.Ceara, he is almost impossible to beat in the first two races, due to which the player falls visas and his task becomes to defend the title by rising from the bottom. If this can be done, then the game will be finally completed.
There are sixteen tracks in the game. The teams in the game are based on the teams from the 1989-1990 season. One of the interesting features of the game is that you can damage the rivals' cars and smash your own car into pieces.
‹
›
Home
View web version