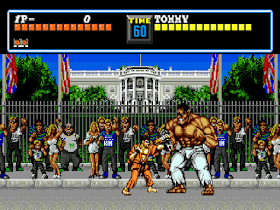 Genre: Action
Perspective: Side view
Gameplay: Arcade, Fighting
Published by: American Treco Corporation
Developed by: SNK Corporation
Released: 1991
Platform: SEGA Genesis / Mega Drive
Quite an unusual fighting game, a mixture of two genres of standard Fighting and beat 'em up. You do not have the right to choose a character. All the time you play for one player - a karateka in an orange suit. The game is somewhat reminiscent of the game Deadly Moves - here you can also play for the passage of only one character Joe. It's not standard in our game that you only have to win once, when in most fights it takes two. You are a street fighter and you have to win to earn money. With money, you can upgrade your character by adding one of the points of health, strength and speed to it. And by the end of the game, create an invincible stronger character than at the beginning of the game. Another interesting thing about the game is that you can place money bets both on yourself and on the opponent. Thus, earning even more money. The winner will be accompanied by beautiful girls, and the loser will be on the edge of life. The game has three different endings depending on how much money you have and how you spend it. The game is quite difficult and you will need a lot of practice. The winner and the lucky one gets fame, money and girls.
‹
›
Home
View web version