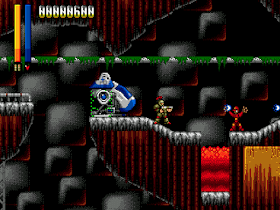 Genre: Action
Perspective: Side view
Visual: 2D scrolling
Gameplay: Arcade, Shooter
Interface: Direct control
Vehicular: Flight / aviation
Setting: Sci-fi / futuristic
Published by: Psygnosis
Developed by: Tempest Software, Krisalis
Released: 1993
Platform: SEGA Genesis / Mega Drive
Funny arcade game. In which you act as a pilot of a spaceship. The purpose of which is a rescue operation under enemy fire. You must carry out a dangerous rescue mission in the Adrianne system. Wellmax has tried to clean up the planet. The game turned out to be quite interesting. After all, here you will fly not only as a spaceship, but also as a pilot. In fact, the pilot can save the needy. It's a pity that the game never received an official release, and it remained a Beta version.